Queen Anne has the luck of maintaining two parks tied together by a similar name and locations abutting the same street -– Howe Street.  Little Howe, also known as East Queen Anne Playground, was established in 1910 when the City of Seattle purchased the land from John and Ida Watrons.  This one and two-fifths acre park was identified by the community as “Little Howe’ from the beginning, the city not having placed a name marker on the property.  Due to the topography, which is higher on the west half than on the east, the property was graded into two levels.  The western half contained two tennis courts, a basketball (playing) court and entry paths; the lower (eastern) portion contained a comfort station and tool shed, a round wading pool flanked with sets of swings, rings and slides.  Both areas were nicely landscaped along the paths and the perimeter of the park. 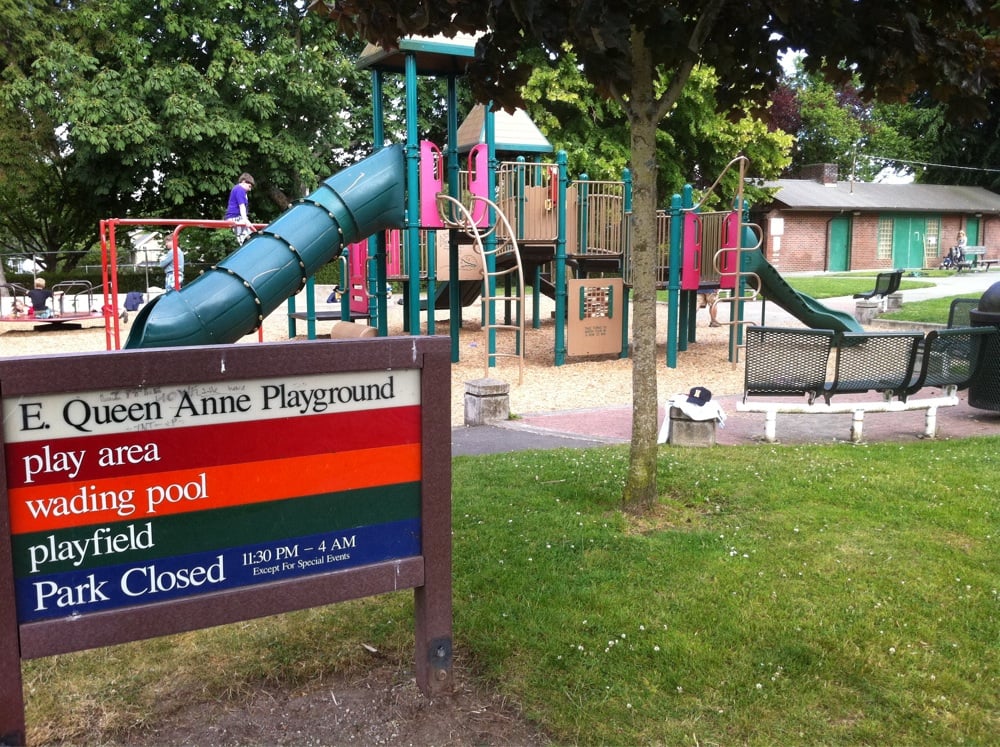 In the late 1920’s there was considerable pressure from the community to allow greater ball playing area (primarily for baseball).  Then, too, the unsatisfactory clay surfaces of the tennis courts caused the parks system to rethink the usage areas.  A small “scrub” ball field was graded at the southwest corner for children.  In 1928 Big Howe was opened as a baseball field for the “high schoolers,” and that new park would remain the grounds for the baseball teams from Queen Anne High School through the rest of that school’s existence.  It was there that Queen Anne played some of its finest games, taking the city title in 1934, 1949 and 1969 — although the actual title games were played at Sick’s Seattle Stadium until 1965, thereafter at Graves Field at the University of Washington.

Big Howe is a six-acre park immediately south of McClure Middle School, at 150 West Blaine Street, or 1901 First Avenue West.  Across from it on the east side is the Queen Anne Community Center (formerly the fieldhouse) with its adjacent community swimming pool.  The playing field at Big Howe consists of two fields with dirt infields, or one all-grass field.  Baseball, softball and soccer are all played here. There is a children’s play area outside of the playing fields, which includes swings, slides, a merry-go-round (carousel) and a “Jungle Gym.”  There are bleachers at the playing field, so a good crowd can often be found there.

Little Howe was redone in the early 1950’s.  The old comfort station was no longer such, considered “a hazard to public health and safety,” and it was torn down.  The new comfort station was placed on the western (upper) level.  By the 1970’s, the Forward Thrust Project gave money to replace much of what was there; the new comfort station was remodeled and the children’s wading pool was moved to the upper section in front of the station.  The address of the park is given as 1912 Warren Avenue North.  The two parks remain a vital part of the Queen Anne community.