[UPDATE 12.8.20 at 3:30 pm.  Owl is flying over the alley north of McClure doing fanciful landings at the top of the tall evergreen tree on the west side of the alley.]

The Seattle Times 1/24/2021:  “A majestic snowy owl perches high enough on Queen Anne Hill to look down on its admirers”

The inventory of 351 King County bird types on the wabirder website (2020_macro_checklist for pdfs) disappointed me.   I was sad to see that snowy owls such as the elegant specimen gracing Queen Anne roofs for well over a week are rare in King County.  ‘Rare’ in birder language means that more than five of them have been sighted in the last year in the county.  In my fantasy world, I believed our owl was the first one ever to venture south of its normal range which extends from the Arctic to the Canadian border.  Now, I may just have to settle with the fantasy that this is the first snowy owl (Bubo scandiacus) ever to alight on Queen Anne.

Our owl ranks with the wild animals that occasionally venture across the railroad bridge at the Locks to camp in Discovery Park.  Coyotes, bears and cougars have all been reported.  Indeed, I even saw an owl on a limb in the park about ten years ago on a bike ride.  The Cascade Bike Club had set up the ride to cover some 80 inner-city miles.  One of my companions that day bravely towed his daughter on a trailer bike.  As we churned up the steep hill alongside DayBreak Star, the little girl, who didn’t bother pedaling, screamed “OW.”  We screeched to a stop (easy to do going up that hill) and turned to her to see what was wrong.  “What’s the matter?”  “Nothing,” she replied.  “Are you hurt?”  “No.”  “So why did you scream OW?”  “I didn’t,” she replied.  Then, pointing to the beautiful bird in a tree beside the road, she insisted, “I said OWL.”  As you might guess, there was nothing special about Discovery Park’s (barn?) owl when compared to Queen Anne’s recent visitor.

Owls do fire imaginations.  The Discovery Park owl surely excited the girl on the bike and me too, but our owl continually thrills my granddaughter.  I am obliged, actually probably more pleased than obliged, to ride by the owl’s haunts every day to make sure he/she/they is ok.  Indeed, every day last week my granddaughter drew a different sketch of an owl during breaks from her arduous first grade school work at virtual Coe Elementary.

Ever since it arrived, large crowds of birders and just plain folks from around the city and probably the entire county have been spending whole days watching the owl apparently stay cool in the shadows of handy chimneys.  You can always tell the birders from the regular folks, for they watch through massive monocular telescopes and cameras whose huge lenses require tripods just to hold them up.  I took a picture with my cell phone.  As you can see in the top photo above, its poor quality tells you why you need massive gear if you want to photograph birds, even big furry ones like our owl.  My friend Elaine Chuang has been out every day documenting this incredible event and took the triptychs above.  More effusive than I, she recently wrote:  “When it comes to looking back on an extraordinary 2020, this will be the most heavenly of our blessings — memories of how we were graced by this Magnificent One.”

Walking the alleys and streets between 1st and 2nd Ave W and W Crockett and W McGraw on Monday afternoon (12/7/20) where I’ve been told she has been on Queen Anne since November 14, I couldn’t find snowy owl, but later a clutch of birders was observed near McClure.  Maybe the owl’s diurnal feedings exhausted the nearby food supply, and it had to roam farther for dinner.  Those owls eat rodents whole, you know!

In the end, I am going to have to accept the hard truth, that this snowy owl isn’t as special as I want it to be.  Yet in this year of the COVID-19 pandemic, the visitation of the snowy owl between Thanksgiving and Christmas has made me happy.  So happy, it seems, that I wanted to record its passage with you and in the archives of the Queen Anne Historical Society.

An unknown artist is also capturing the owl’s visit on the alley off W. Boston between 1st and 2nd W. 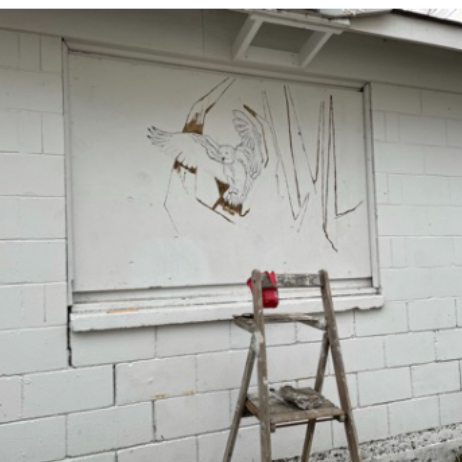 Remember the Queen Anne Historical Society stays strong when you join us or renew your membership here.